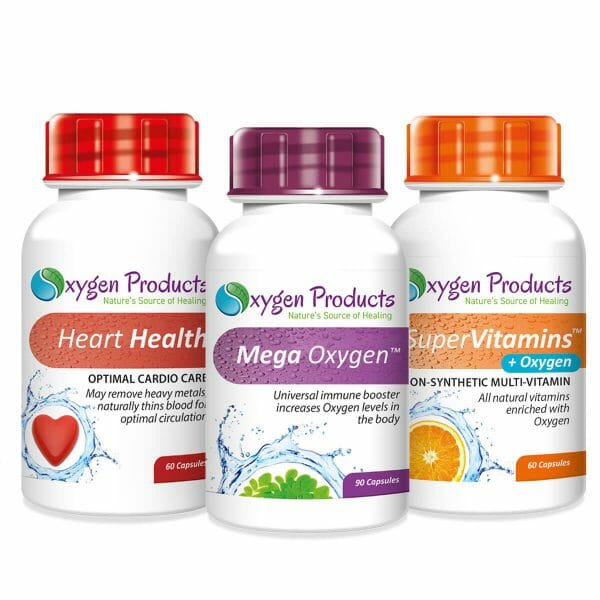 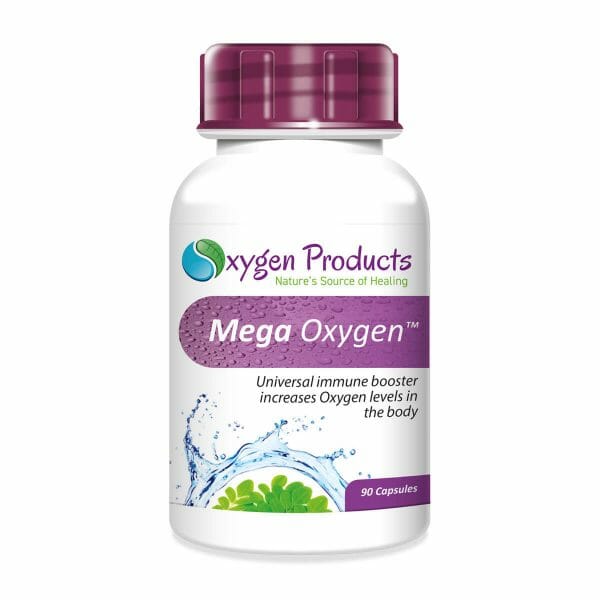 With all the goodness of a vegetarian capsule that is suitable for both vegetarians and vegans.

Mega Oxygen ™ Vegan capsules is a natural systemic blood oxygenator with an African herbal blend that boosts the immune system and is pivotal in helping the body to heal itself to combat critical diseases.

Our Oxygen Therapy ™ range has the product Mega Oxygen ™ at its core, and it is our flagship product and is now available in Vegan Capsules.

What are Vegetarian Capsules?

A vegetarian capsule is a clear capsule made from plant-derived materials. It doesn’t contain any irritants or preservatives. You also won’t find any sugar, wheat, corn, dairy or soy in these capsules, which is beneficial for health-conscious and allergic consumers. There are some differences from vegetarian capsules and standard capsules that only allow for certain uses. They are fast dissolving and easily digested. Each one holds between 150 and 300 or more milligrams of dried material.

What is Oxygen Therapy?

Oxygen therapy is a unique scientifically proven natural therapy which creates an environment within the body where disease cannot thrive. Decades of research has highlighted the fundamental truth that the primary cause of all diseases is linked in one way or another to oxygen deficiency. However, when the human body is supplied with abundant amounts of oxygen, cancer cells, harmful bacteria, toxins, viruses, pathogens, and disease microorganisms are destroyed as they cannot survive in an environment where oxygen levels are high. Treatment through this therapy does not cure disease but enables the body to heal itself.

Oxygen cannot cure any disease unless it saturates the cellular structures and tissues of the body. For oxygen to eradicate disease, it must be delivered not just to the lungs, and not just to the bloodstream, but to the cells and tissues. The two-time Nobel Prize-winning doctor, Otto Warburg, shocked the world when he revealed that most disease is caused by insufficient levels of oxygen in the body. Dr Warburg showed that if you deprive a cell of 35% of the required level of oxygen for 48 hours, then the cells are likely to become cancerous.

HIV, cancer, tuberculosis, diabetes and poor heart conditions are among several of the devastating dreaded diseases resulting in loss of life among millions of people worldwide. Most are unaware that, besides cancer, lack of oxygen is the underlying cause of most diseases.

People are becoming increasingly aware of the detrimental, even dangerous, side effects found in several traditional and conventional chemically based medicines and often prefer to opt for a more natural, less aggressive approach to personal health and healing.

The benefits of Mega Oxygen ™ Vegan

Mega Oxygen is a natural therapy that assists the body to heal itself. It supports general health and well-being, including poor blood circulation, detox, migraine headaches, open sores/wounds/gangrene, allergies, colds and flu.

Successful outcomes have been noted in the treatment of serious health conditions and diseases such as cancer, HIV/AIDS, diabetes, asthma, rheumatoid arthritis, gout, Alzheimer’s and more…

Mega Oxygen is specifically formulated by Oxygen Products (PTY) LTD to contain the following ingredients:
Magnesium Peroxide, Vitamin C, Hypoxis (African potato), Sutherlandia (cancer bush) and Selenium, which are incapsulated in a vegetarian based capsule, suitable for vegetarians and vegans.

The Hypoxis Rooperi (African Potato) contains phytosterols and sterolins, which boost the immune system and combats infection. Studies done on a group of volunteers with professor Bouic from Stellenbosch University, showed a significant increase in the number of T-cells, which are involved in strengthening the immune system.

Sutherlandia (Cancer Bush) has a long history of medicinal use. A number of recent published scientific studies on cancer bush, have shown interesting results, including anti-HIV activity, anti-oxidant activity, anti-inflammatory activity, anti-cancer activity Studies by the Medical Research Council of South Africa and other bodies have demonstrated that the Sutherlandia extract is safe, and that it is almost certainly the most profound and multipurpose of the medicinal plants in Southern Africa. Cancer Bush is a Plant You Should Know About.

Historically this plant has been used as a salve for wounds as well as a fever reducer. It has been known to treat chicken pox, stomach problems, as well as certain ailments of the eyes.

Selenium – Selenium deficiency is now also known to be associated with greatly increased cancer risk. Seleno proteins are part of the DNA structure of the cell and are made of the sulphur proteins Cysteine and Selenium. In times of crisis, the DNA is broken down, surrendering the Cysteine and Selenium to be used as antioxidants.

When Mega Oxygen is taken with water, the vegetarian capsule shells break down in the digestive system exposing the contents to water. Magnesium peroxide; once in contact with water, releases oxygen at a controlled rate.

The oxygen from the reaction then absorbs into the bloodstream, where it stimulates metabolism, blood circulation, redox and the immune system.

The increase in cellular metabolic activity caused by the oxygen absorption also stimulates digesting of the other ingredients, thereby enhancing their uptake and effect on the body.

To learn more about our products; please visit our article library.

Mega Oxygen ™ Vegan Capsules taken regularly is the foundation to your general health and wellness.

There are no reviews yet.

Only logged in customers who have purchased this product may leave a review.

Oxygen Products (PTY) LTD does everything in its power to respect the delivery times indicated on the website. We cannot, however, be held responsible for the consequences of a late delivery or the loss of a package caused by a third-party contracted to make delivery, or by you, or because of some unforeseen event or an Act of God. In the event where you do not receive your package, an investigation will be conducted with the carrier and may take several days upon receipt of your claim. During this period of investigation, no reimbursement or re-delivery will take place.

Please clearly specify when placing your order which service you would prefer.

Please be aware, The South African post office only accepts parcels that are a maximum of 30 Kg.

Please allow a 48 hour delivery period for your orders delivered via courier. Subject to the administrative processing of your order and no delays from the courier service.

The closing time for processing orders for shipment is at 12:00pm on Fridays.

Oxygen Products (PTY) LTD cannot guarantee the delivery times as shown as our deliveries are performed by third party contractors and we cannot be held liable for any delays in the service that these contractors may experience.

You will receive a Shipment Confirmation email once your order has been despatched containing your tracking number/s.

If you received your order and it is damaged, please contact Oxygen Products (PTY) LTD with proof of damage caused (in the form of photos, signed acknowledgement of the courier, copy of the waybill and any other evidence deemed needed) via the chosen courier service and we will immediately take the steps necessary to rectify the situation.

Please save all packaging materials and damaged goods before filing a claim.

Should you not receive your order within the above delivery dates. Please do not hesitate to contact Oxygen Products (PTY) LTD immediately and furnish your tracking number. We will then take immediate steps to follow up with the courier service you have chosen to rectify the problem. If your parcel is confirmed as lost we will immediately dispatch to you a replacement order and claim the costs from the relevant courier.

Oxygen Products (PTY) LTD allows you 30 days to return a product that you are not satisfied with. Your right of return starts from the moment your order is delivered. You can return the product to us within this time frame, at your own expense, with your invoice and a completed and signed returns coupon.

We request that you send us the merchandise by registered post and that you purchase insurance with your carrier for the value of the merchandise. This is necessary should they lose or damage the goods. Shipping fees remain the customer’s responsibility. The present right of return only applies to products that are returned in their original, complete condition. Any product that has been damaged, is not in its original packaging, or has packaging that has been worn beyond simply opening the product, will not be refunded. The deadlines mentioned above are effective from the date of receipt of the order.

If the product is returned within 30 days of its delivery, the User will be reimbursed via the same payment method as was used initially.

We allow a period of 30 (thirty) calendar days for the return of the product, from the date that you received our product.

Due to the nature of our product (for human consumption), we require that the product be returned in its original packaging, with all seals intact and in the same condition that you received it.

Unfortunately we cannot entertain any returns if the product has been tampered with in any way.

To enable us to expedite the return process, we respectfully request that you kindly supply either a receipt for or proof of purchase of our product.

Once we receive your item, we will inspect it and notify you that we have received your returned item. We will immediately notify you on the status of your refund after inspecting the item.

If your return is approved, we will initiate a refund to your credit card or original method of payment.

Once the refund has been processed by ourselves you may have to allow a few more days before you receive your funds, this is dependent on the policies of your card issuer or payment source.

You will be responsible for paying for your own shipping costs for returning your item. Shipping costs are non​ refundable.

If you receive a refund, the original shipping cost (if levied) will be deducted from your refund.

You forgot to select your pick up point!
Remember, we have pick up locations throughout the country, just pick one!